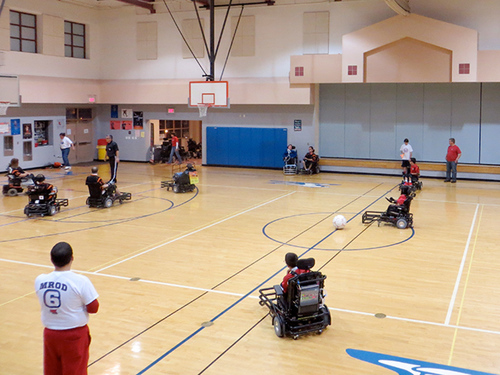 A pep rally was held in Fishers, Indiana showcasing the Indiana members of the U18 team: Lexi Heer, Zach Dickey and Michael Rodriguez. With bleachers full of fans the U18 team played against local athletes from RHI Sudden Impact, RHI Indy Cruisers and Circle City Rollers. The U18 team looked dominant on the court, winning 4-2.

The highlight of the evening was the attendance of Juergen Sommer, the head coach of the new Indiana professional soccer team, Indy Eleven. Coach Sommer was amazed by the skill and ability of the players competing. At the end of the game coach Sommer was invited to join the U18 team with one of the Strike Force chairs, allowing him to better understand the game and provide great entertainment.  He managed to move about the court and score his first power soccer goal on a kick in from near the top of the box!

Sommer, Indy Eleven President and General Manager Peter Wilt, and Vice President of Marketing and Operations, Tom Dumore, followed up with a note with interest of further collaboration.

The U18 team leaves for Paris, France on October 30.