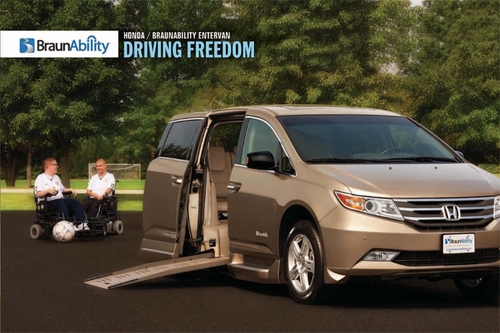 Braun Ability is now a proud sponsor of the US National Power Soccer Team. Braun has donated a generous amount as there contribution to the team and its future. Not only have they made a significant donation but Team USA members, Michael Archer and Case Calvert, are now featured in the new brochure for the Honda Odyssey / BraunAbility Entervan. In the brochure "Driving Freedom" Michael and Case are seen featured next to the Honda Odyssey in their Team USA World Cup Championship apparel.

The brochure talks about Michael and Case saying "Michael Archer and Case Calvert are powered up for power soccer. It’s a fast-growing, competitive sport, and for the uninitiated, the intensity of the games can come as quite a surprise. That’s what brought these two friends together — the chance for head-to-head competition. Off the court, life is just as active. Michael is on track to become an air traffic controller, and Case starting his career as a graphic designer. Whether it’s to the next game or the next job interview, both rely on their BraunAbility Entervans to get them where they need to go. An added bonus: they’ve got more room than any other teammate to store the game equipment."